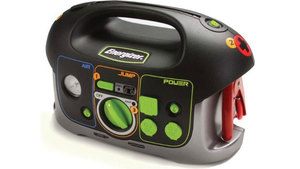 Sooner or later you’ll wish you had this. Just like I did this past summer. I was at the local air show, and traffic was a nightmare. Figured I’d turn the car off but leave the radio and cell phone chargers on. About 30 minutes later my car wouldn’t start. So I did what anyone would do – ask the people in the traffic jam for a jump – except that nobody had any jumper cables. I would have been all set had I had this Energizer jump start system. It’s 350 cold amps battery can jump start your car in no time. Also has a built in air compressor to deal with flat tires, a DC converter to charge your gadgets and a flashlight.