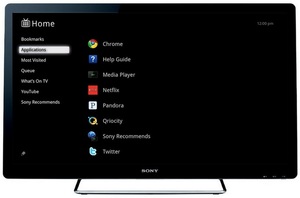 The Sony 46-Inch LED HDTV with Google TV technology built in. This HDTV isn’t like your normal flat screen HDTV. With built in wireless network controls, you can use your TV to surf the internet without any additional computer hardware. That’s not enough? How about checking your Facebook and Twitter accounts? Still bored? Stream online video from Netflix and YouTube, or listen to your favorite tunes with Pandora. All built in. Get caught up on the daily news with the New York Times and CNN apps.The included keyboard makes navigation around the internet quick and painless. If you’re the type that sticks your nose up to included accessories, no problem – plug in a keyboard and mouse of your choosing and it’ll work just fine.

Oh yeah, you can watch TV on it, too. Use the built in search feature to find your favorite show or actor, tune in immediately or set it to record on an additional DVR system. Let’s be honest though, while you’re “watching” Jersey Shore, you’ll be using the Picture in Picture system to continue stalking your ex on Facebook.